An interesting puzzler featuring a unique rotating mechanic that taxes the brain for as long as it lasts, but could’ve done with a little more meat.

In the world of The Bridge, an un-named man must make his way through a series of labyrinth puzzles inspired by M.C Escher, impossible with the rules of normal physics but possible in this dream like world. Each is contained through a doorway in his house, which becomes increasingly mysterious the more he explores. 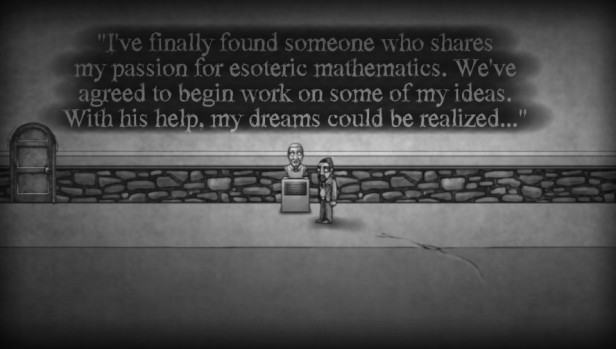 The ‘story’, if it can be classed as one, is told through a series of cryptic sentences uttered by a statue of Isaac Newton (I assume) between each set of levels. I couldn’t really make heads nor tails of it and got the feeling it was trying to be a bit smarter than it actually was – coming across as a little bit pretentious overall. Still, it’s such a small part of the overall package that it hardly intrudes too much, just ends up being a little bit disappointing all the same.

Painting its world through stylish monochrome graphics with a very unique style, The Bridge is a game that blazes its own path and looks fantastic for it.

From the opening moments where you wake up the main character by dropping an apple on his head, you can tell you’re in for something special. Every area in the game has been crafted with care, looking like a hand-made painting (in black and white) with plenty of little details thrown in to make them shine. Playing through throws up a tonne of screenshot-worthy moments, even if the framerate does have minor wobbles from time to time when you’re rotating the world.

There’s a sinister undertone to everything too – whether it be the balls of death that roll around threatening to disintegrate you with sinister grins on their faces or the mysterious portals which invert the world and transport your spirit to another realm, everything has a creepy style that benefits the game a great deal. The whole atmosphere is otherworldly and that’s in no small part thanks to the graphics.

Music and sound effects are surprisingly soothing, helping to create a relaxed feel which is enjoyable to solve puzzles in.

Featuring simple mechanics but surprisingly complex puzzles, The Bridge is a brain teaser that I had quite a lot of fun with – it’s short and sometimes a little frustrating, but not one I’ll be easily forgetting. 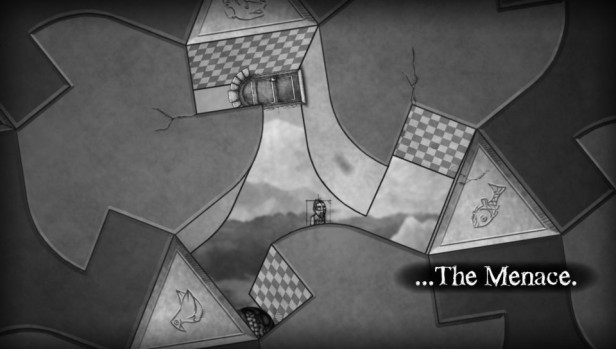 Your aim is to solve esoteric maths problems by rotating the world around you (using either the shoulder buttons or gyro controls), so the little nameless man can reach the exit in each level. He can’t run, jump or hang off ledges so you’re going to make sure he always had a flat surface to walk on and failure can send him hurtling off into space – although a handy rewind time feature ensures you can quickly rectify any small mistakes along the way.

Of course, it isn’t as straight forward as simply rotating – you’ll come across numerous obstacles along the way, such as gigantic balls of death that will roll around the levels whenever you rotate and locked doors which require specific keys to unlock. Figuring out how to make it to a key without being hit by the ball is often a major part of the problem and will require some lateral thinking to figure out.

Yet half the time, the battle is simply figuring out how the level works. With stairways looping back on themselves and impossible physics at play, just understanding where you can and can’t go is a struggle. With that said, I found that the puzzles weren’t too taxing until the final few in the fourth world, meaning this is an entry-level title which is easy to get to grips with (but the difficult ramp up at the end is significant, meaning you’re going to have to apply multiple steps of logic to make it through to the end).

New mechanics are slowly introduced with each world, such as Vortexes (which suck objects in and won’t release them unless you hit a switch) and Inversions (which literally change the physics of the level allowing you to approach things in a different way), allowing some nice variety (and they always include tutorials for the first few stages which were immensely helpful for working out solutions later on).

The main issue relates to just how much content is here – there’s four areas with six stages each, but these always contain tutorials for at least the first couple. As such, you can be done with The Bridge in an afternoon, although mirrored levels are unlocked once you’re finished which adds a nice reason to come back if you’re interested, but otherwise won’t do much to sway you to stay for more.

A smart puzzle game with some unique mechanics, The Bridge is a triumph in both its gameplay and visuals, although its pretentious story leaves something to be desired. It’s a good afternoon worth of fun although you’re unlikely to want to come back to it after that, making it a cautious recommendation if you can get it for the right price.