Omega Force’s ambitious take on the supremely popular anime/manga series is a soaring delight, but some repetition and technical issues dull the experience on Vita.

Set in the same fictional universe as the anime and manga, AOT follows humanity as it struggles to cope with an invasion from the Titans – terrifying naked giants that devour people and generally bring destruction wherever they go. The main plot thread follows the humans as they suffer losses against the Titan menace and attempt to fight back, uncovering more information about them as they go.

It’s a very well-made dystopian world which is likely why it has resonated so well with audiences in both the west and east. There’s a real feeling of unbeatable odds making every encounter feel tense and an uncertainty about the future which is captured well in this adaptation, even if the foes themselves are a little too easy to dispatch. Many of the areas from the series are well represented, from the cramped cities to the open outer wall areas, making this a great way to fully explore familiar locations.

Wings of Freedom itself is a whistle-stop tour through the key points of the first season of the anime and even a little bit beyond. It definitely covers everything major, but leaves out some of the more optional development which is what makes this world so interesting and as such I wouldn’t recommend this as your entry point to the franchise – use it if you’re already familiar, but not if you’re looking to replace watching the anime.

Of course, an interesting world wouldn’t be enough without compelling characters and Attack on Titan provides these in spades. Whether it’s the lead Eren, with his brazen determination or even minor side characters like the oblivious Sascha, the cast as a whole are interesting and you’ll become invested in their fates, even if the game doesn’t do a fantastic job of telling their story due to the rapid speed the plot moves at.

One thing I would commend the game on over the anime, however, is its ability to prioritize different characters and tell things from their perspective. At various points you’ll control Eren; Mikasa: Armin and Levi due to the way the plot progresses and this allows to explore new viewpoints of the events. It certainly brightens up what I assumed would have been an Eren-focused story.

As an obvious down-port of a PS4 game, Wings of Freedom has a lot of problems that make it less than optimal to play on Vita. My personal opinion is that none of this gets in the way of the thrill of having a game like this on a handheld, but be warned if you’re sensitive to pop-in; graphical glitches and framerate drops you may wish to stay away.

Starting with cutscenes – the game features a number of these to illustrate more important scenes and they’re generally pretty decent – characters are emotive with facial expressions; tone is judged well and voice acting is on point (something that runs throughout the game, although sadly only Japanese VA is available, but that still helps with getting across the original feeling).

Moving on to character models – obviously there are two lots here, humans and titans and honestly there is a world of difference between the two. Human models are high-quality – they look exactly like people from the anime and these models are used in both dialogue scenes and combat. They have a variety of animations when speaking – similar to any low-budget Japanese games in recent years, but animate better in combat where they zip across the screen and respond well to the ODM pulling in different directions (even down to a little ‘leaning back’ animation when taking off).

Titans, on the other hand, look awful. They’re mostly just a gigantic mass of brown skin, often with obvious edges in. They gallop towards the human characters with a menacing glee, but as soon as you start severing limbs they’ll jankily fall to the ground like half of the animation frames didn’t play properly. The situation is exacerbated by how they interact with the environment, as they’ll regularly clip through buildings and other objects making them difficult to target at times.

Speaking of environments, these are another mixed bag. On initial inspection they can be quite pretty – sweeping vistas full of trees or cramped city streets surrounded by towering walls. While they do make fun places to zip around, closer inspection leads to a number of technical deficiencies that spoil the experience.

The main is pop-in – draw distance in general is pretty low and objects can often appear out of nowhere. This never gets so bad that it interrupts the flow of swinging through the streets, but it’s there. Textures also have a bad habit of being almost PS1-era from a distance before upgrading to higher-resolution the closer you get, although they’re still pretty blurry on the whole. Things like trees are also hilariously low-poly and look out of place compared to everything surrounding them.

All of this was obviously an attempt to keep framerate at acceptable levels, but I can’t really say that’s an area where the game succeeds. Multiple enemies on screen causes things to slow down and getting a cinematic kill on a foe brings things to a crawl. Performance is generally alright when flying around the arenas and personally it was never so bad to bother me, but I have a high tolerance for this stuff and the fps is anything but stable.

Other elements of the presentation are fine – menus are serviceable, running a fitting military theme; while the UI when in combat is fairly messy with lots of information on screen. Important parts of the interface are always prominent, however – such as a minimap to show the state of the battle and positions of foes and allies, meaning it never becomes unbearable.

Sound is decent too, with the Japanese voice acting present and effects like slashing a Titan’s nape and the whoosh of the ODM all taken from the anime. Music was nothing to write home about – it worked well in the cutscenes, but in combat it was nothing more than background noise.

A third-person action game using the Warriors games as a base, Wings of Freedom innovates in a number of ways to create a unique experience worthy of being its own thing – although familiar Musou fatigue sets in after repeated plays to make things less special after a while. 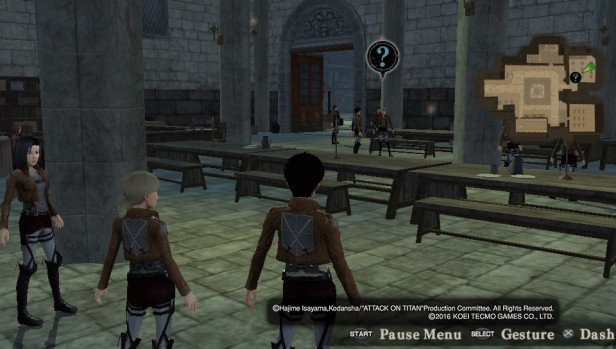 After navigating past the menu and viewing a cutscene, you’ll be placed in a hub world allowing you to move around and interact with fellow cadets as well as temper your equipment and (after a certain point) replay earlier missions. The game features a number of these hubs throughout the story which provide assistance with immersion in the world, but they’re generally pretty static places to be without much in the way of things to do – you’ll quickly be moving on to the missions.

As mentioned, there is a weapon crafting/upgrading system in place here whereby you collect materials from Titans you beat in battle and use these to either craft new items or upgrade the ones you have. It’s simple stuff but provides a nice incentive for changing your strategy when attacking as certain actions will net you more loot.

The main bulk of the game revolves around undertaking missions to progress the plot – these are usually either story-related mandatory ones or optional survey corps side-missions. Either way, you’re plonked into the middle of a large battlefield with free reign to go and do whatever you like, although markers are provided to funnel you to undertake specific actions to progress the core objectives. A nice touch is that side missions will often appear while out in the field via a smoke signal (a nod to in-universe mechanics from the anime) which allows you to pick and choose what you want to do at any one time.

It’s this freedom that the game makes the most of – the ability to move and the sense of speed while doing it is almost unparalleled among games on Vita. Thanks to the Omni-Directional-Movement Gear (ODM), you can zip around the landscape by latching on to nearby objects and propelling yourself through the air, providing a boost if momentum is lost from an additional gas cannister. At times, Attack on Titan feels like a Spider-man game – even down to the fact that the ODM requires a nearby building or structure and so are affected by physics when moving. 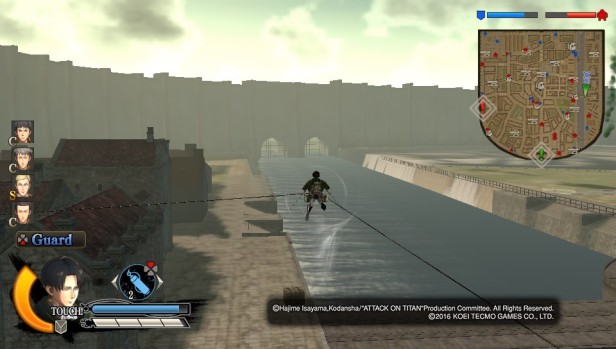 And so it’s an absolute joy to move around in game – once you get into the flow of this it feels incredibly natural and liberating, alternating hooks and gas to fly around. Things would grow tiring eventually without sufficient opposition to take you on, however and this is where the Titans come in – monstrous beings that tower over the landscape and require quick wits and careful movement to dispatch. They’re taken down by latching the ODM onto a specific part of their body which you character will circle round in the air, before going in for the kill once the moment is right. If this is the nape of the neck the Titan will go down in one, while other parts will merely be severed from their bodies.

It’s an interesting variation on Omega Force’s usual combat systems and provides some thrilling action early on as you get to grips with the systems. Little perks between characters such as Levi’s spinning attacks or Armin’s ability to command allies add some variety, but ultimately fighting Titans never evolves much throughout the campaign beyond this. You’ll be using the same tactics over and over – either severing a few limbs or just going directly for the neck, then moving on to the next foe. It makes the Titans feel like fodder, rather than the almighty adversaries that the are in the AOT universe. 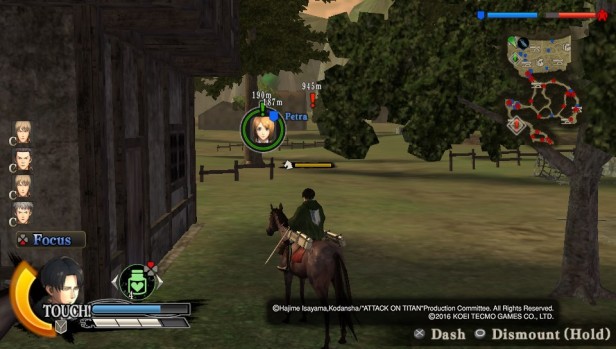 A lack of variety in missions also causes issues with repetition – you’re normally tasked with either killing specific Titans; escorting allies or destroying obstacles then repeat this again and again. An occasional respite can appear (such as a rather thrilling recreation of luring Sawney and Bean into Hange’s traps) but these are few and far between. As such, Wings of Freedom is a game which shines bright early on but fades away the longer you play.

Speaking of length – the title is a meaty one, featuring three main story arcs as well as a great deal of survey corps missions which can be cleared solo or with friends. I’d estimate it’d take at least 20 hours to play the story content alone if you blasted through it, although mixing in optional stuff on the side is encouraged to level up your characters and equipment. If you like what the game is offering, there’s certainly enough of it to justify the price tag.

Therefore Attack on Titan is the kind of title I can imagine keeping on my memory card and just dipping into every now and again. It is fun and is the kind of game that I got excited about picking up and playing again whenever I put it down, its just a shame the variety wasn’t there to keep that feeling up until the conclusion.

Wings of Freedom provides a very fun core of movement and combat in the shell of an Attack on Titan game and your first few hours will be undeniable fun – but it has major issues sustaining this over a longer period. In addition, a lack of optimization means performance drops too often to unacceptable levels and a little more time spent on this would’ve been nice. Yet in spite of all these issues, the game is one I can keep coming back to and is definitely something I’d recommend if you’re a fan of the IP – even not, it’s worth considering if you’re after a fun action-adventure game with some fantastic traversal mechanics on the Vita.