The first in a series of articles I’m planning on writing, looking at the output of a number of Vita-supporting developers from launch through to the present day. I’ll be examining what their history in the games industry is, what the games they released on Vita were, how these titles performed, what games they could have released on Vita as well as an overall conclusion about their level of Vita support.

In 2017 I wrote a series of articles looking at all the Vita games from a number of publishers, yet at the time I was already thinking about how interesting it would be to examine the output of individual developers. Sony’s handheld may not have been a sales success in itself, but certain studios managed to make a living by creating titles for it that targeted the right audience – and none demonstrate this better than Artdink, the quirky Japanese company who have increasingly branched out into anime development in recent years.

Artdink’s history dates back to the 1980’s where they released the first entry in their long-running city simulation series A-Train (which was subsequently ported to practically every platform under the sun), but I’d argue they became most well known for their experimental titles on the PS1.

Among these were things like Aquanaut’s Holiday, an calming underwater exploration game; No One Can Stop Mr Domino, a very unique puzzle game where you run laps and place dominoes and Tail of the Sun, an adventure where you explore the land to find Mammoth tusks which are used to build a tower to reach the sun. Many of them were described as “non-games” due to their open-ended nature and unconventional structure but established Artdink in the market (if you’re interested in playing them, the majority are available on Japanese PSN for a few hundred yen).

They continued these quirky games well into the PS2 & PSP era – things like The Seed: Warzone as well as a great many new A-Train entries on the former and new iterations in their mech-programming franchise Carnage Hearts series on the latter. In fact, the first entry to hit western shores in decades is Carnage Hearts EXA on PSP (which you can play on Vita through backwards-compatibility, sadly the PS1 version isn’t up on PSN) – which was both praised and derided for its complexity. 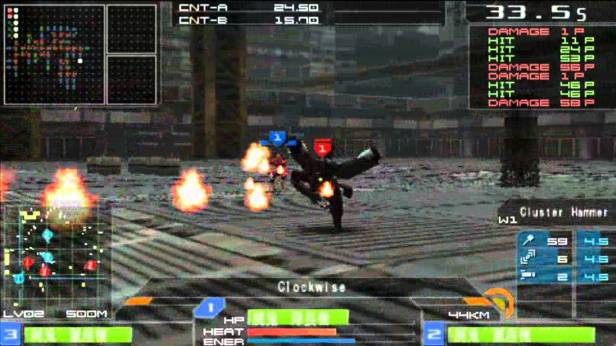 In a precursor to what their Vita support would be, they also worked on a number of anime crossover games during PSP’s life including the Gundam Battle series and multiple Macross Frontier titles. All of these combined mech combat with flight mechanics and seemed very well received by fans of the shows – showing that Artdink had a knack for this type of work (again, you can get the Gundam games on Vita if you have a Japanese PSN account).

For their first project on Sony’s new handheld, Artdink continued to produce the types of games that had propped them up on the PSP – beginning in 2012 with the newest entry in their Gundam Battle sub-series entitled Mobile Suit Gundam: SEED Battle Destiny. 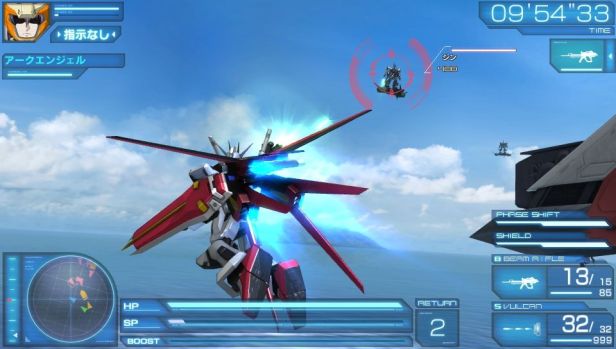 This time focusing on the ‘cosmic era’ of the ever-evolving Gundam storyline, the game kept the same lock-on system and mission-based structure seen in previous entries, but embraced the Vita’s improved hardware by using the dual analogue sticks for better control options and featuring higher-quality assets for the mechs and environments. It proved popular with importers and sold a solid 100k in Japan, marking a good start to Artdink’s Vita support – although sadly it would be the penultimate Gundam title they would work on and the last one on a handheld.

They re-used this formula again in 2016 with Macross Delta Scramble – a new entry in another long-running mech-combat series based on the latest anime adaptation. Again, the game mixed open-air flying with third-person shooting combat to great effect, but beyond this it provided some of the most gorgeous Vita graphics seen alongside a rock-solid framerate – making it one of the most technically impressive titles on the handheld. Sadly, it didn’t fare particularly well in Japanese sales.

Still, I was a massive fan of Delta Scramble and it was probably the game that made me take note of what Artdink was capable of on the handheld – which by this point included an incredible amount of other anime titles.

Perhaps thanks to proving themselves with Gundam and Macross, Bandai-Namco entrusted the developer with another one of their successful franchises – Sword Art Online, where they took many of their existing design ideas but applied them to a different template which worked surprisingly well.

Their first attempt – Sword Art Online: Lost Song – focused on the ‘fairy dance’ arc of the anime and allowed players to engage in MMO-inspired combat but also introduced flying elements, no doubt inspired by their work on Macross. While reviews were somewhat mixed highlighting the repetitive content and wonky story, the game was praised for its open design and ability to invoke the feel of the MMO – it was also noted that the game ran well on Vita, likely due to it being the lead platform for development.

Sadly, this wasn’t replicated in the sequel Accel World vs. Sword Art Online: Millennium Twilight – a title which ran so poorly it actually made my list of 10 technically disappointing Vita games thanks to its poor framerate and questionable graphical quality. Despite these issues Accel World was otherwise praised for smartly crossing over the two franchises and offering gameplay improvements over Lost Song – making it a cautious recommendation if you fancy playing on Vita.

With the doors busted wide open regarding what anime series Artdink could work on, they used Vita as a testing ground for a variety of different ideas. They all shared one common thread though – they were action games which used the skills picked up during Gundam as a gameplay base. 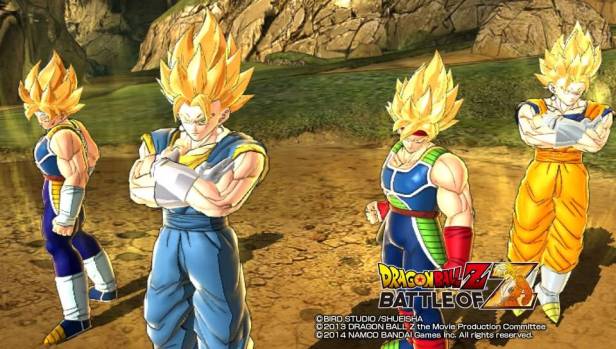 They first tried this with a Dragon Ball Z game which was a tie-in to the latest movie, named Dragon Ball Z: Battle of Z. While the title was relatively well-optimized for Vita (running at native resolution and a solid framerate) and the IP was still relatively popular around the world, it seems that fans of the series weren’t impressed by Artdink’s mix of 4v4 combat and open flight exploration – Battle of Z shifted around 620k copies worldwide, which was worlds apart from the amount the later Xenoverse games would sell.

Still, the company kept trucking on with their Vita output – next was Puella Madoka Magicka: Battle Pentagram, an action game based on the popular series about a group of magic girls who fight surreal enemies called witches. Using much simpler gameplay design more akin to a musou than a flight-action title, it proved to be a decent seller in Japan (50k) but import reviews bemoaned its simplicity and lack of variety – definitely making it one of Artdink’s weaker games. 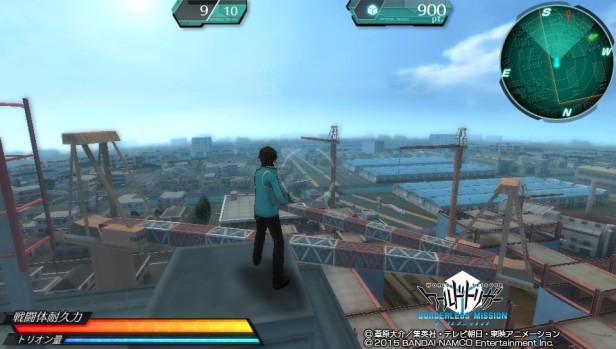 They made up for this a year later though with the release of World Trigger: Borderless Mission, a title which I imported and had a tonne of fun with. While it contains an inevitable layer of jank and some unfair difficulty spikes at time, its mix of open-environment exploration combined with Earth Defence Force-inspired alien shooting and superpowers that allow you to jump up buildings made for a really enjoyable time. It highlights everything Artdink have become good at, although as usual there’s a good few performance issues along the way.

While the Artdink of the 1990’s is long gone, unable to produce the kind of experimental titles with which they used to make due to the commercial realities of the gaming market, they do occasionally release the odd game which falls into this camp – although sadly, they only did this once for Vita. 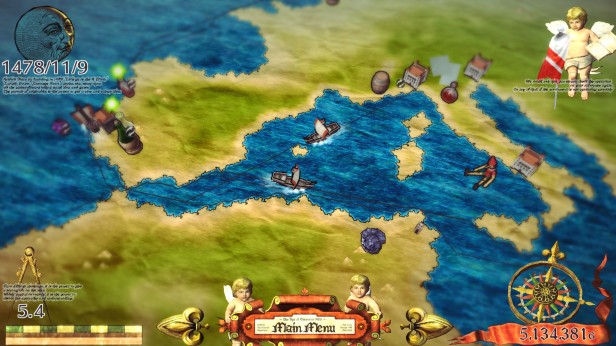 This was with the exploration-strategy game Neo Atlas 1469, amusingly a much-delayed sequel to a franchise which had flourished on the PS1. Despite the fact that it debuted as a Vita-exclusive in Japan in 2016, it came west as a PC-only title a year later – before being ported to Nintendo Switch where it’s getting a western physical release later this year. From what I can tell, the English translation has never been patched into the Vita version, making it frustratingly out of reach for owners of Sony’s handheld.

Artdink do still make A-Train titles too, most recently with the PS4 release A-Train Express but they’ve also dabbled in handhelds with the 3DS title A-Train 3D: City Simulator. Sadly, they never attempted to release any of these despite their obvious familiarity with Vita development, which is a massive shame – particularly as there are no other simulation games of the type on the console.

By far their biggest missed opportunity was not releasing the well-received Macross 30: Voices Across the Galaxy on Vita, instead making it a PS3-exclusive in 2013. As a celebration of the last 30 years of the franchise, it would’ve been a perfect fit for Sony’s handheld line (where the series had flourished), but for whatever reason it never happened.

Artdink are a fantastic example of a company that succeeded on Vita – thanks to their skill in crafting anime tie-ins with a strong action base combined Vita’s audience which skewed towards niche Japanese titles meant the studio were able to find a fantastic home for the past 7 years, where they were rewarded in turn with solid software sales. As a result, we were treated to some surprisingly enjoyable games and Artdink were even able to experiment with reviving one of their dormant franchises (to mixed success).

Unfortunately, there were a few missed opportunities along the way (I’d love to be able to play an A-Train title on Vita and am really gutted that I can’t get Neo Atlas on the handheld in English) but in as Vita-supporting developers go, things don’t get much better than this. Artdink were properly on board with this console and I am personally very happy that they were – games like Macross and Sword Art Online are a tonne of fun and I can’t imagine playing them anywhere else.

5 thoughts on “A history of Vita games: Developer Spotlight – Artdink”